My Favourite Place in China, Xinjiang by Nick Moore 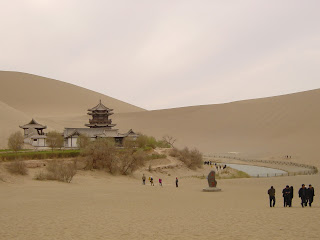 In summer 2012 I spent 3 weeks in Xinjiang Province, the mysterious province in the north-west of China which is larger than the whole of Western Europe. Having already travelled a lot in China, I could not have prepared myself for the very different and very un-Chinese culture that I would face in Xinjiang. Flying from Beijing to Urumqi takes roughly 4 hours and from the moment you touch down and get off the plane the dry desert heat hits you, but feels so much more bearable than the sticky humidity of Shanghai. I was met by a good friend at the very impressive modern airport and driven by taxi to my hotel, winding through dusty, noisy busy streets. A modern electric bus service – the BRT – cuts through these streets, rapidly taking bus-loads of passengers across the city, overtaking elderly men riding carts pulled by donkeys. 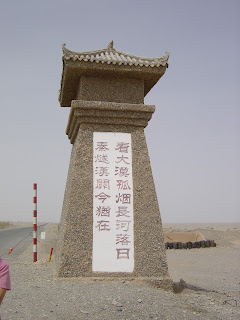 Xinjiang is a desert province, a vast area that has played its role in Chinese myths and legends for millennia as the Middle Kingdom’s great unknown. However it is a province full of life and culture, it is here that the Far East becomes Central Asia. Han Chinese live side by side with Hui, Uighurs, Mongols, Kazakhs among other fascinating peoples. Urumqi is a vast sprawling city where you can find yourself walking through luxury shopping arcades that rival those of Beijing and Shanghai (Urumqi’s Maison Mode shopping centre features Prada, Burberry and a great restaurant floor), and then five minutes later you can turn a corner and find yourself in a market that one would never associate with China, with the delicious smell of lamb skewers and traditional Islamic music floating in the air. The Grand Bazaar is a must-see when in Urumqi. Minarets sing out the call to prayers, towering over streets filled with Uighur musicians, market stalls selling special local products and fantastic street food. The Korgan restaurant is superbly decorated and offers traditional lamb and central Asian dishes, a far cry from rice and noodles. 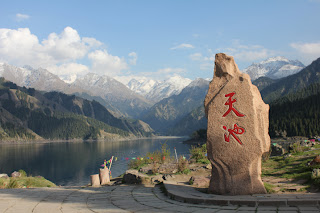 One hour outside of Urumqi is one of China’s best kept secrets. Tianchi (天池) – Heavenly Lake – is an astonishing surprise in the middle of the desert. Take the shuttle bus through a dry and arid landscape with goats running alongside you, shepherded by the nomadic Kazakhs who live in nearby tents. Suddenly the dry landscape gives way to a mountainous valley, lined with pine trees overlooking crystal clear streams coursing towards the desert. Hairpin bends curve sharply one after the other until you finally reach the lake. Ringed by snow-capped mountains in the middle of the desert, the vivid blue lake stretches as far as the eye can see. Legend has it that the Heavenly Empress would bathe here, and without the usual flocks of tourists that normally descend on such beautiful sites in China, she still might feel it peaceful enough to continue bathing here. 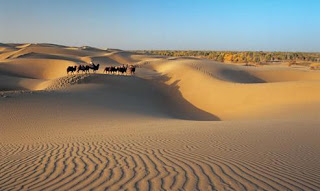 I left Xinjiang for a fourteen hour train journey to Korla, an oasis town in the Taklamakan Desert. Rumbling through the desert overnight, I felt a sense of the danger and romantic mystery about the caravans and camels that would have crossed these vast sand dunes centuries ago on the Silk Road, all the way to Xi’an and further into China.

Korla is now an oil-rich city that has developed a lot in the past 10 years. The beautiful luscious gardens alongside the Kongque River should not belong in the middle of the desert; in fact it is rare to find such a well-kept town in the whole of China. Korla’s main tourist attraction is Tiemenguan, a centuries-old border gate where Silk Road travellers would have been checked before being allowed entry. You can now take a boat trip on the lake near the gate, which holds a surprise in store – a 1960’s Spy and Intelligence Building left to waste since the end of the Cold War.

If you have any question regarding travelling to China you can call 0207 487 2999 or email sales@chinaholidays.co.uk

Email ThisBlogThis!Share to TwitterShare to FacebookShare to Pinterest
Labels: ChinaHolidays, holiday to china, off the beaten track China, Travel in China